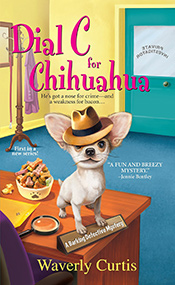 Pepe may have soft white fur, big brown eyes, and mucho attitude—but he’s no furry fashion fad. Pepe can talk—even if his new owner, Geri Sullivan, seems to be the only person who can understand him.

When Geri takes on her first assignment for a quirky investigator named Jimmy G and stumbles over a Seattle millionaire’s corpse, Pepe proves to be worth his weight in liver treats. Suspicion falls on the not-so-grieving widow, who wants to finance a reality TV show, Dancing With Dogs.

Normally, Pepe wouldn’t be caught muerte in a sparkly costume. However, he has to sniff out the real killer and keep Geri safe. Lesser dogs might flinch. But Pepe isn’t the kind to turn tail and run… 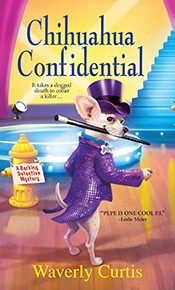 When novice P.I. Geri Sullivan first heard her adopted Chihuahua talk, she thought she’d gone barking mad. But it turns out Pepe is a savvy sleuth—and if he has his way, he’ll soon be a bone-a-fido celebrity, too, as Pepe and Geri are Hollywood-bound to star in the reality show Dancing With Dogs. So far, so bueno.

Then Nigel St. Nigel, the judge everyone loves to hate, becomes the judge someone wanted dead. Pepe and Geri are hot on a killer’s heels but between perfecting the paso doble and protecting Pepe’s Pomeranian lady love, both have their paws full. If Pepe’s new status as a Beverly Hills Chihuahua goes to his head, it may be the last waltz for Geri’s crime-biting compadre… 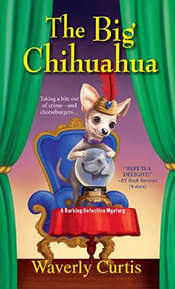 P.I. Geri Sullivan and her talking Chihuahua, Pepe, are always hungry to sink their teeth into a new case. So if helping a hapless husband win back his wayward wife means sneaking into a cult of dog-worshippers, porque no?

Inside the believers’ rural retreat, Pepe perks up his ears when the charismatic leader pegs him as the next incarnation of the spirit Dogawanda. But the discovery of a body, murdered between mantras, suggests there’s more chicanery than channeling going on in this suspicious sect. While wild wolves howl, a killer is on the prowl—and it’s up to Geri and her canine compadre to dig up the dirt.

A Chihuahua in Every Stocking: A Barking Detective Story 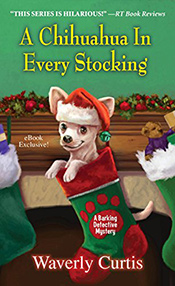 Who would steal a little girl’s dog, right before Christmas? After seeing young Sophie’s heartbreaking story on the news, P.I. Geri Sullivan and Pepe—her talking Chihuahua—vow to rescue this bonita canine named Chiquita. But tracking the pooch’s scent through a Pacific Northwest winter wonderland isn’t easy, especially when the trail leads to an elf who’s been mortally mauled! Geri and Pepe must save little Sophie’s Christmas and find this muy naughty dognapper… and stir up a little Christmas magic along the way! 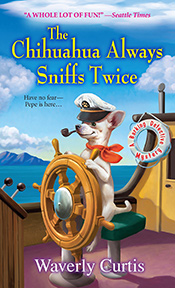 Aspiring P.I. Geri Sullivan’s new case has got her talking Chihuahua, Pepe, hot under the collar. Wealthy widow Lucille Carpenter left her entire fortune to her beloved dogs, and someone is trying to poison them. Anyone who would hurt a perro is lower than a cucaracha in Pepe’s book. But when Geri and Pepe investigate, they discover that it’s not just the coddled canines who are in danger. Now there are human targets too.

At the lavish Carpenter manor, Pepe digs for clues among the pampered pooches, bitter relatives, suspicious staff, and larcenous lawyers. But there’s only one diminutive detective smart enough to save the day—and the dogs… 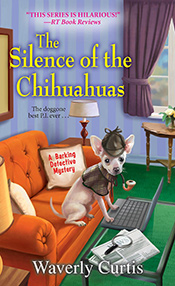 The Silence of the Chihuahuas: A Barking Detective Mystery #5

Luckily, Pepe turns out to be an excelente blogger, and his nose for clues soon has the detective duo chasing down leads. But they’ll have to put a bite on crime quickly, because danger’s afoot—and it’s making tracks in their direction… 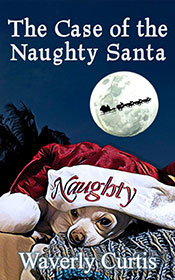 The Case of the Naughty Santa: A Barking Detective Story

A dead Santa. Felonious reindeer. A sexy Westie. A missing boyfriend. And Los Posadas. Mix them together and you have this humorous short mystery from Waverly Curtis, featuring Geri Sullivan and her talking Chihuahua, Pepe.